Marketing retirement housing as aspirational and not a sign of crisis

We conducted one of the UK's largest consumer perception surveys in the retirement housing sector.

As experts in retirement housing and later living, we wanted to gain better understanding of what the public thinks about retirement housing schemes and what the industry can do better to raise profile and encourage consumer adoption of these schemes.

We surveyed 2,000 UK adults and 100 representatives from retirement housing providers and then consulted with a cross-industry steering group to discuss the data from organisations including; Housing 21, Lifestory Group, Housing LIN (Learning and Improvement Network), Orbit Group, Elderly Accommodation Counsel, the Local Government Association and the Chartered Institute of Housing.

Overwhelmingly our research reveals the disconnect between the public and housing provider perceptions of the sector.  The data clearly shows that the public are unsure about the benefits and services provided by retirement housing schemes – often confusing them with care homes and nursing homes to the detriment of the sector. 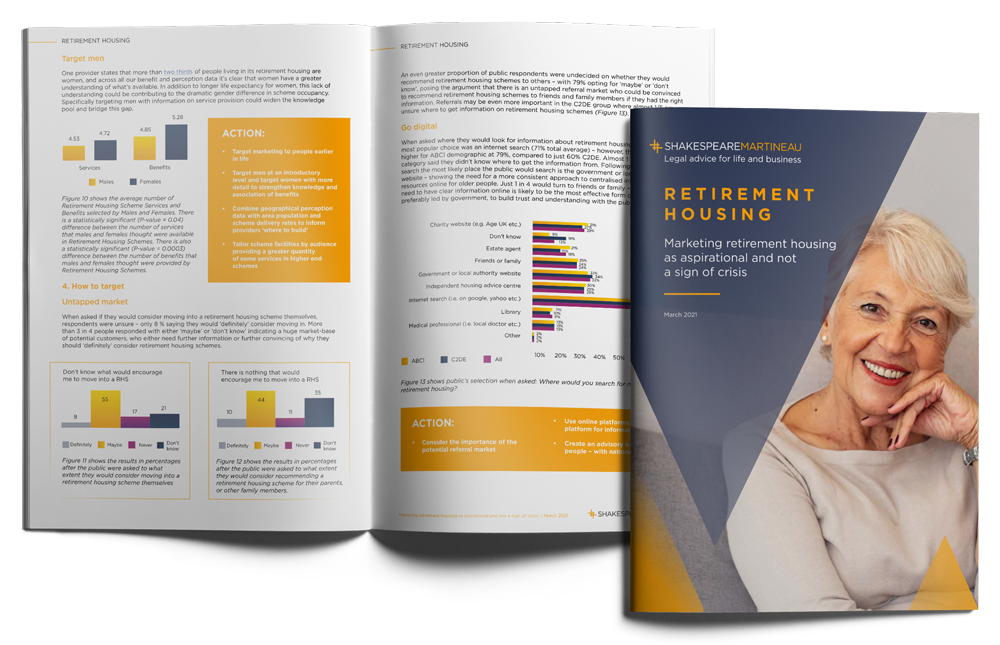 Of those public respondents, 1 in 3 members of the public believe retirement housing schemes are synonymous with ‘old people’s homes’ and there was disconnect between the services the public expected compared to the services actually offered by housing providers. For example, more than half (56%) of the public respondents expected a medical centre or 24/7 emergency response to be available, when in fact closer to only 1 in 3 (36%) providers selected this service as one they did provide, indicating that providers are coming up short of the expectations of the public.

“We have long suspected inconsistencies in the perception of the benefits of retirement housing, due to a lack of public understanding. This, linked with limited information on the various products available and an internal inconsistency of language within the sector, is causing the perfect storm.

“Misconceptions that retirement housing schemes are the same as care homes is tarnishing the sector’s reputation – regrettably worsened by the high mortality rates of residents during the COVID-19 pandemic. We wanted to corroborate our concerns and identify the disconnect, so that, with this knowledge, the sector can take steps to improve education and awareness of the many benefits of retirement housing in a bid to encourage ‘right-moving’ and a more proactive consumer adoption of these schemes.”

What is the public perception of retirement housing?

When asked about the benefits of schemes, more than three quarters of the public agreed that retirement housing offered a safe and secure place to live (76%), two thirds felt that they are a good alternative to residential care homes (66%) and more than 3 in 5 (62%) agreed they offer a desirable place to live. However, only around 1 in 4 (28%) of the public agree that retirement housing offers good value for money – with nearly half of respondents stating that they didn’t know.

When asked about the ‘type’ of people who would benefit from living in a retirement housing scheme, only the minority of the public believed highly active (33%) or working (14%) older people would benefit. Housing providers believed ‘older couples’ are amongst the most suitable group (91%) but only 44% of the public agree, with a higher proportion (67%) selecting single people.

“What was clear from the research and our group discussion was the need for clarity – we must demystify retirement housing. So often we hear residents saying how they had wished they’d moved into a scheme earlier, or that they hadn’t realised how beneficial it could be – this needs to change, but this has to be a united push for change across both public and private operators.”

Would the public consider moving into a retirement housing scheme?

The white paper indicates an untapped potential and referrer market. When asked if they would consider moving into a retirement housing scheme themselves, public respondents were unsure – only 8% saying they would ‘definitely’ consider moving in. More than 3 in 4 people responded with either ‘maybe’ or ‘don’t know’ indicating a huge market-base of potential customers, who either need further information or further convincing of why they should ‘definitely’ consider retirement housing schemes.

An even greater proportion of public respondents were undecided on whether they would recommend retirement housing schemes to others – with 79% opting for ‘maybe’ or ‘don’t know’, posing the argument that there is also an untapped referral market who could be convinced to recommend retirement housing schemes to friends and family members if they had the right information.

It also highlights the need to focus on celebrating the benefits of schemes over and above labelling schemes with words such as ‘retirement’ and ‘older people’ – opening them up to more people.

“There is an ageism issue; retirement housing has historically been built on a dependency model, not aspirational, where people have been placed into retirement housing, instead of it being a decision or a desire of the individual. While the product works and has clear benefits we urgently need to rethink our marketing approach so that residents, communities, housebuilders and local government understand the social and economic value of this important sector.”

“Retirement housing isn’t suitable for everyone, but it’s clear that there is a need for a centrally-delivered advisory board for older people - and the language used by the advisory board and the sector as a whole should be consistent, positive and benefit-led, so that the public has the information they need to make an informed decision about retirement housing.

“For years we’ve seen research paper after research paper banging the drum for suitable, appropriate housing – as it’s been shown to increase happiness and life satisfaction, and decrease costs to the NHS - but if we are going to get more people considering retirement housing schemes we have to make them aspirational and properly understood by our older generation. Retirement housing must become a model of want, not need. We can only drive this demand by showing the public the lifestyle benefits gained from these schemes and through better education, information and marketing.”

Enter your details in the box below to receive a copy of the retirement housing white paper direct to your inbox.

This report has been commissioned and produced by Shakespeare Martineau.

With thanks to experts from Housing 21, Lifestory Group, Housing LIN (Learning and Improvement Network), Orbit Group, Elderly Accommodation Counsel, the Local Government Association and the Chartered Institute of Housing for joining our expert panel steering group to discuss the data.

Our team of later living experts live and breathe the sector and can work with you to ensure your
ambitions are fulfilled.

We are also known for championing a widespread reconsideration of older people’s needs
and aspirations for later living. We skillfully advise on the challenges and opportunities
open to providers.

All the latest news on later living and retirement.

View all our later living articles